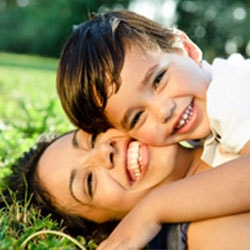 When a parent is being denied their court-ordered parent time or visitation rights with their minor children, they may file an enforcement action against the recalcitrant parent in district court. This is often done by means of an Order to Show Cause or similar motion. An Order to Show Cause, or OSC, orders a party to appear in court to explain why they should not be held in contempt for knowingly and willfully violating a court’s orders. Alternatively, a Motion to Enforce Parent-Time may be brought.

Such an OSC or motion must be accompanied by an affidavit, or declaration, of the moving party, filed concurrently with the motion and describing with specificity the order that is allegedly being violated, and the circumstances surrounding the alleged violation. So, for example, if parent-time has been denied contrary to a court order, the moving party will want to include in their affidavit or declaration the exact dates of the violation, the efforts they have made to secure their time with the children, and the actions of the other parent in thwarting their efforts to have time with the children.

If the only issue in the OSC or motion is parent-time or visitation, then the case will automatically be referred to the Co-Parenting Mediation program. This program is set forth at Utah Code Section 30-3-38. The mediation will be scheduled quickly (within 15 days of the motion being filed), and both parents must participate in good faith.

If a resolution is not reached in mediation, then the mediator will typically filed a certificate with the court that mediation was attempted by the parties in good faith, but no agreement was reached. The parties may then proceed to court to argue their respective positions. The court may award to the prevailing party their costs, including actual courts costs and attorney fees, incurred in enforcing compliance with the court’s parent-time orders. See Utah Code Section 30-3-7.

Interestingly, the aforementioned section of the Utah Code contemplates that a prevailing party in a parent-time enforcement dispute may recover costs “because of the other party’s failure to provide or exercise court-ordered visitation or parent-time.” Emphasis added. In other words, a parent who fails or refuses to take their allotted time with the children may be held to account by the court. Though most parent-time enforcement actions involve allegations of unjustified denial of parent-time, it is perfectly legitimate as well to bring a case against a non-compliant parent in the presumably rare situation in which he or she refuses to exercise their time with the children. After all, even the best of parents need the occasional days off and help in caring for the children, and, just as important, the children themselves need both parents to be actively involved in raising them.