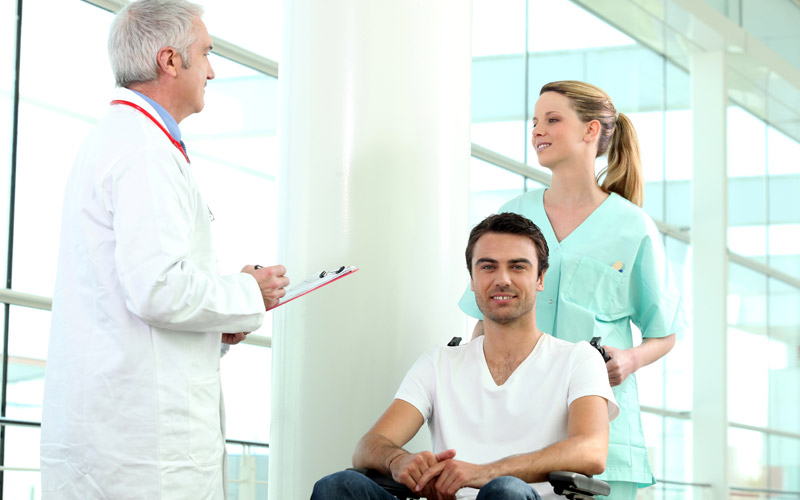 When a person applies for SSI or social security disability benefits, the case is assigned to an examiner at Disability Determination Services. This is a state agency that assists the Social Security Administration in making disability determinations at the initial and reconsideration levels of adjudication. If a claim is denied initially, a person has several levels of appeal. The first level is called reconsideration.

If the claim is denied at the reconsideration level, the person may appeal and request a hearing by and Administrative Law Judge. This affords the person the chance to be heard, or in common parlance, to have their day in court. This is an important step in the process in which Social Security attempts to ensure due process of law for claimants, of which an opportunity to be heard in an essential component.

If the person’s claim is denied after a hearing, they can appeal it to the Appeals Council. There are even levels of appeal after that, including federal court.

At the administrative law judge and appeals council levels of adjudication, the findings of state agency medical and psychological consultants are not binding. However, they must be considered as expert opinion evidence. Thus, they must be weighed according to factors set forth in social security’s regulations, including in particular, the factors outlined at 20 CFR 404.1527(a) through (f) and 416.927 (a) through (f).

There are progressively more rigorous tests for weighing medical opinions the weaker the connection between the medical source and the claimant. So, for instance, an opinion from a treating source who has seen the claimant for a long period of time is generally entitled to more weight than that of a consultative physician or a state agency consultant who has only reviewed medical records.

Opinions of state agency medical consultants are entitled to weight only insofar as they are supported by the medical evidence as a whole, including consistency with other medical opinions. There may be some limited circumstances in which state agency consultant’s opinions may be given greater weight than those of treating doctors, such as when the state agency medical consultant had reviewed the entire record, including evidence that was not seen by the treating doctor. But in general, these circumstances will be limited and treating source opinions are given greater weight. However, state agency opinions should not be disregarded.

The ultimate issue of whether a claimant’s impairments meet or equal one of Social Security’s  listing impairment is one reserved for the Commissioner. See posting from October 24, 2014. State agency medical consultants may make findings as to whether or not a claimant’s impairments are equivalent in severity to those of one of Social Security’s listing of impairments. But these findings become expert opinion evidence at the ALJ hearing and Appeals Council levels of adjudication and are not binding at those levels.

In order to decide whether a claimant’s impairment(s) are equivalent to one of the listings, medical expert opinion evidence is required. When an ALJ or the Appeals Council decides that medical equivalence is not met, the requirement to receive such expert medical evidence on this issue is satisfied by the state agency consultant’s signature on one of the designated forms showing that they considered and rendered an opinion on this issue.

However, there are two circumstances in which an updated medical expert opinion must be obtained at the ALJ or Appeals Council levels, namely:

1) When no additional medical evidence has been received but in the opinion of the adjudicator it appears that a decision of medical equivalence to a listing may be appropriate; or

2) When additional medical evidence is received that in the opinion of the adjudicator may change the state agency medical consultant’s opinion that medical equivalence is not met.

In either of these two circumstances, an updated medical judgment as to medical equivalence is required. The ALJ must then call upon a medical expert at the hearing. The Appeals Council must call upon the services of its medical support staff.

In addition, the assessment of a claimant’s residual functional capacity (RFC) is one reserved for the Commissioner. See post from October 24, 2014. Thus, it is the ALJ and Appeals Council’s responsibility to assess the claimant’s RFC at their respective levels of administrative review.

The RFC findings of state agency medical or psychological consultants are not binding upon an ALJ or the Appeals Council. But they must be weighed by the adjudicator as medical opinions from non examining sources as to what the claimant can still do despite his or impairments.  Again, treating source opinions on this issue would typically be entitled to more weight than those of state agency consultants.